Our dataset comes from the Urban Institute and US Census and focuses on racial wealth inequality. We chose this dataset because wealth inequality is a very important issue in America, and it would be valuable to see the relationship between race and wealth over time in America. There are around 5-6 data files focused on the relationship between race and income over time.

For the purpose of answering the two questions below, we will be focusing on the home_owner and income_mean data sets. The home_owner data set will help us to visualize home-ownership rate information for each race while the income_mean dataset will help us to visualize the income earned for each income quintile for each race during a particular time period.

1. How has home-ownership rate and wealth changed over time and vary between races?

When it comes to home ownership in the US, a major event that has shaped our parents’ lives and even ours to a certain extent was the great recession around 2009 and the housing bubble caused by faulty mortgages. For this context, we wanted to explore changes in homeownership percentage a few years before and after the crash and see which races have been particularly affected by it more. For this, we used thehome_owner dataset and use the year, race, and home_owner_pct variables.

When it comes to plotting information from 3 different variables, that includes a categorical variable, some of the most efficient plots would be a line plot and barplot. Line plots are best for displaying the change of a value, such as homeownership percentage, over the course of time. Thus, we used a line plot to plot the change of homeownership percentages by different racial groups (White, Hispanic, Black) from 1976-2016.

As previously mentioned, apart from just a line plot, the grouped barplot does an efficient job in comparing 3 different variables where one is categorical. When making an animated plot, the benefit of a grouped barplot is that it makes it very easy to see the exact percentages over time, which is ideal to see the exact changes in homeownership percentages across the years and racial groups. To make the bar plot easier to read, we added grey, vertical dotted lines with 2007 serving as the baseline for comparison. This makes it easier to determine whether or not the homeownership percentage value has decreased or increased relative to 2007 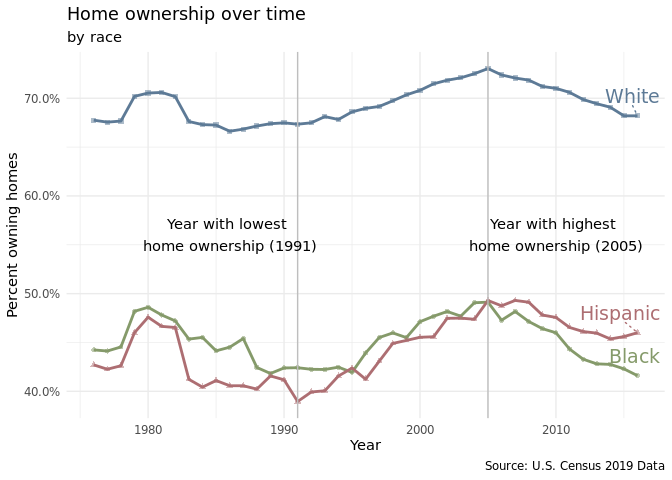 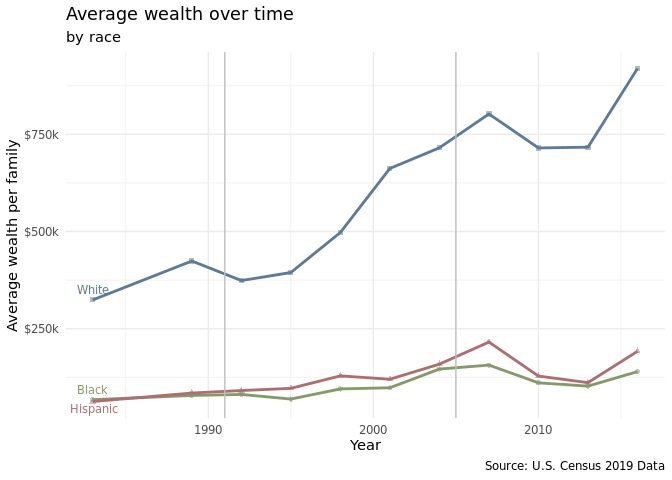 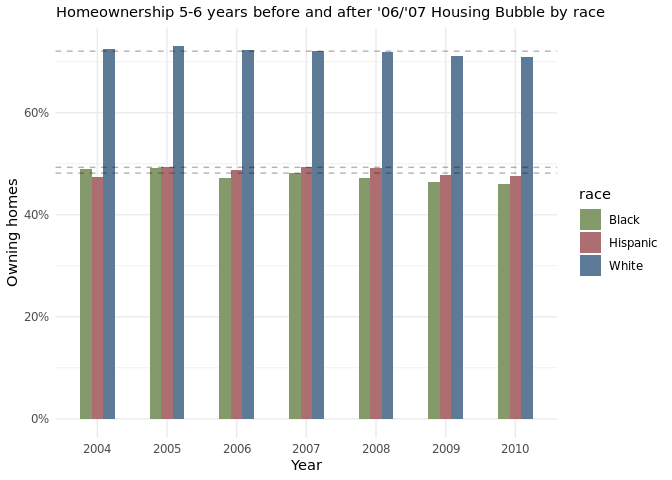 The line plot shows that there is a consistent racial disparity in homeownership percentages between Whites and Hispanics and Whites and Blacks. Upwards of 65% of White Americans have consistently owned homes from 1976-2016. Meanwhile, for the same years, lower than 50% of Hispanics and Blacks have owned homes. After 2005, a greater percentage of Hispanics own homes compared to Blacks. There are many possible reasons for the racial disparity in homeownership rates such as the fact that White families tend to have greater wealth than Hispanic and Black families and that White individuals are more likely to receive inheritances than other minority groups which can be used for home down payments (Bhutta et al.).

Around 2007, the homeownership percentages started to decrease across all racial groups(Black, Hispanic, White), which makes sense as it was the start of when there were a lot of foreclosures. Treating 2007 as the baseline, it is apparent that hispanic and black communities were significantly more affected by the foreclosures than white communities. This is apparent from the bar chart as there is a larger decrease in homeownership percentages for the two racial groups compared to the white demographic. Through the animated grouped bar chart, it can be noticed that for the most part that homeownership percentages have not gone back to the levels at which it was before the housing bubble, based on the most recent data collected at 2016.

2. How do household income levels compare between races and within each race?

Most income inequality research focuses on the income disparity between different races, for example, how Asian Americans and White Americans typically have higher income as compared to African Americans and Hispanic/Latino Americans. There is significantly less research focusing on the income disparities within each of the races. We are trying to figure out the degree of income inequality for each of the races within their own community. In this question, we will be using income_mean.csv. This data set is sufficient since it provides us with the income information for each household quintile, year, and race. We will be using the following variables: year, race, income_quintile, and income_dollars which will be explained further in the “Approach” section.

Average income distribution by race has changed over time. We chose a line plot and decided to facet by race with year on the x axis and average income amount on the y axis. We cared less about looking into specific years and more about overall trends and comparisons within each race. To clean the data for this visualization, we filtered out race categories that included combinations and the “all” category. This left us with 4 levels: Whites, Blacks, Hispanics, and Asians. We wanted to highlight the top earners in each racial category- so we colored them in red. Something interesting to note is that data collection for Asian observations only started around 2000. It is hard to easily compare differences between races, so we decided to zoom into 2019 and make a bar chart.

Average income for each income quintile by race. We chose a bar bar graph because we are trying to compare how much more the top 20% of earners mae than those who make less for each racial group, and understand which race has the highest gap (through a stacked filled bar chart). A bar graph is ideal since we can group or stack them together and color them based on the income quintile variable, making the visualization easier to be understood by readers. 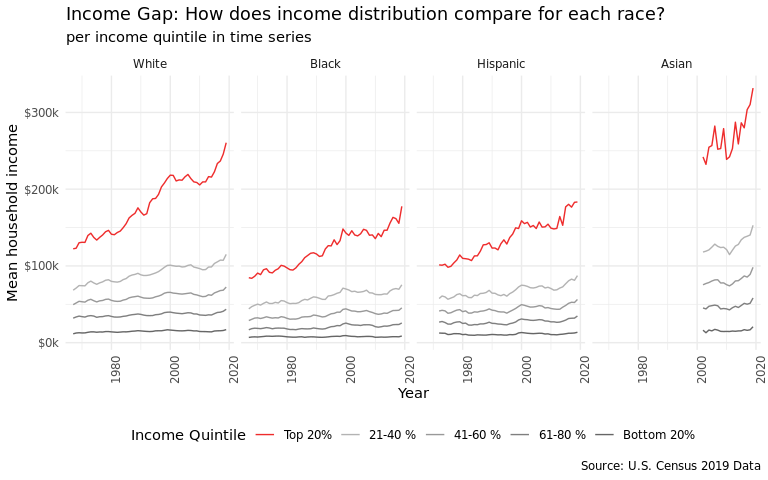 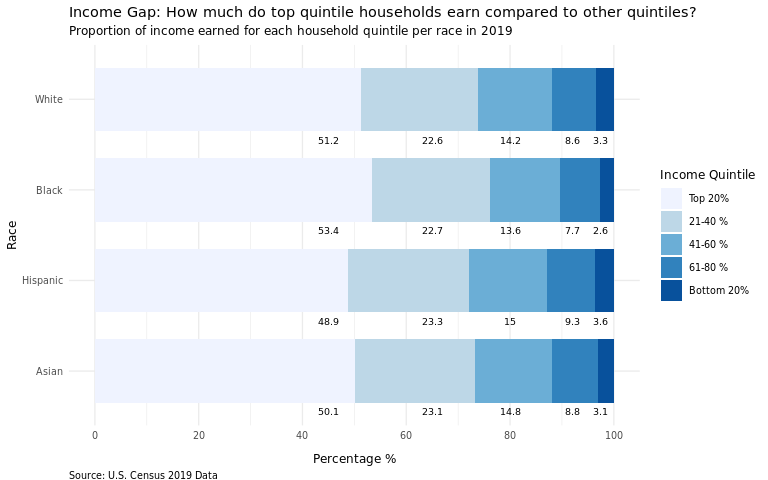 From the 1st plot, we found that those who are Asian tended to have the highest average income, and their top 20% made far more than the other racial groups. Overtime, income disparities in all the racial categories increased when considering the top 20% of income earners. This increase in disparity seemed to be most noticeable for White households. We suspect that generally income is the highest among Asians due to their high educational attainment on average, and lowest in Black individuals due to the systemic disadvantages they have experienced throughout U.S. history.

From the 2nd plot, we can roughly surmise that income inequality is the highest within Black households and lowest within Hispanic households. Our speculation is that income inequality is highest among the Black category on average, because of lack of high-paying jobs and opportunities for Black individuals living in the rural Southern States vs. those living in Northeastern or Midwestern urban areas. For Asians, we speculate that income inequality is higher than Hispanics due to the different migration patterns and sources that Asian Americans’ ancestors came from. For example, Indian and Chinese Americans have a high proportion of professional college-educated citizens, while a lot of Southeast Asian Americans are doing blue-collared jobs and many came to the United States as refugees from less wealthy backgrounds.

Our presentation can be found here.

Our data comes from the Urban Institute and the US Census.

The US Census provides Historical Income Tables, of which we have joined several to compare wealth and income over time by race.